Bacillus anthracis—anthrax—had largely faded from public consciousness until it resurfaced as a terrorist weapon in 2001. It was always with us, lurking in the soil and hosted by our livestock. Long before it was identified as a specific bacterium in the late 1800s, “anthrax” was a catchphrase for a variety of diseases and symptoms, from ancient biblical plagues to a painful carbuncle on George Washington’s leg. Only when industrialization turned anthrax into a widespread disease that threatened economies did a true understanding of Bacillus anthracis begin to emerge.
This history of anthrax follows the development of our understanding of the disease, beginning in the 18th century, when science began breaking ground on the subject, until the present, when anthrax is feared more as an agent of biowarfare than as a health hazard harbored by the environment. There are three appendices: the first outlines the reaction of Manchester, New Hampshire, to the 2001 anthrax attacks; the second documents workplace warnings to anthrax-prone workers; and the third lists novels that involve anthrax. Bibliographical references are also provided.

Consultant Richard M. Swiderski is also the author of Multiple Sclerosis Through History and Human Life (1998). He lives in San Rafael, California. 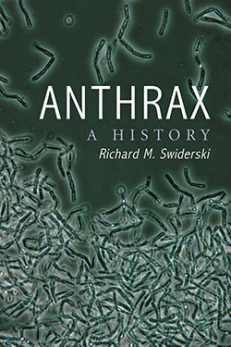