A Complete Guide to Her Film, Stage, Radio and Television Work

Anna May Wong, born in Los Angeles in 1905 to a Chinese family that did not support her ambition, is the only Asian-American actress to have achieved stardom during Hollywood’s Golden Age. Staying single to avoid endangering her career, she became the darling of the intelligentsia, inspiring poems, songs, and crowds of admirers in the British Isles, Europe, and China. She leaves a legacy of some 60 film appearances, numerous stage and television shows, and several radio spots. This book covers Anna May Wong’s entire career and personal life. Detailed filmographic entries, with critical commentary as well as cast and technical credits, synopses, and newspaper and magazine reviews, are followed by Wong’s stage work and radio and television appearances.

“a first-rate job…photos throughout are terrific…does what it should, and does it nicely…the best detailed study on Anna May Wong’s film career”—Classic Images; “considered by many Hollywood’s premier Chinese American actress…three books on Wong have been published, and of these Leibfried and Lane’s is by far the most successful…terrific…detailed information…covers all of Wong’s work…the preferred resource for those interested in Wong’s career…essential”—Choice; “interesting and well-researched”—Communication Booknotes Quarterly; “film-by-film structure makes good organizational sense…extensive synopses”—Variety. 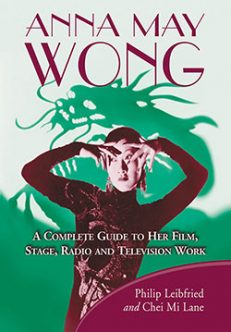