The Life and Hollywood Career

Here is a comprehensive survey of the film and television career of London-born director Andrew V. McLaglen. An opening biography considers the events and circumstances that contributed to his development as a filmmaker, including his relationships with his actor father Victor McLaglen, fellow director John Ford, and motion picture icon John Wayne, who collaborated with Andrew McLaglen on such films as McLintock! (1963), Hellfighters (1968), The Undefeated (1969) and Chisum (1970).
An extensive annotated filmography covers every theatrical feature film McLaglen directed, as well as his television productions and the films he worked on prior to becoming a director. Appendices provide information on the numerous documentaries in which McLaglen has appeared, and a list of stage plays he has directed since his retirement from motion pictures in 1989.

Stephen B. Armstrong is an associate professor of English at Dixie State University in St. George, Utah. His articles and reviews have appeared in numerous publications, including Film Quarterly, Film Score Monthly, Classic Images and Films of the Golden Age.


Appendix I: Appearances in Documentaries      245 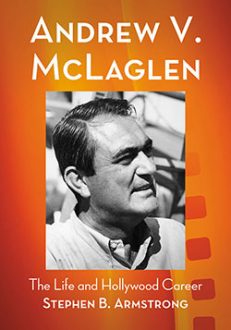