An American’s Journey into Buddhism

Structured as a patchwork of conversations, recollections, and lyrical encounters, this rich spiritual autobiography allows readers to eavesdrop on a restless soul in quest of self, God, and home. The memoir tells the story of an American who became intrigued by Buddhism through his love of Asian art and who decided to study the discipline in a Japanese Soto Zen monastery.
In Part One, the author gives an account of his life in the Hosshinji monastery in Obama, Japan, detailing his daily routine and his participation in a traditional Takuhatsu almsgiving ceremony, a Sesshin period of intensive meditation, and a Jukai Buddhist initiation ceremony. Part Two describes the author’s difficult search for a Buddhist temple to continue his religious practices upon returning to the United States. Part Three deals with the author’s involvement in the International Institute for Field-Being and details how his Buddhist training helped prepare him for that venture. Part Four describes obstacles the author has encountered as a lone Buddhism practitioner since his training.

Albert Shansky teaches philosophy and religion at Norwalk Community College (Connecticut). He has previously written on Japanese life and Buddhism.

PART 3. The International Institute for Field-Being      141 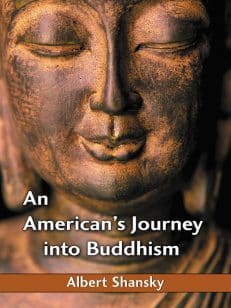 You're viewing: An American’s Journey into Buddhism $19.99
Add to cart