An Encyclopedia of More Than 3,000 Classics Through the 1980s

Covering more than 3,200 classic country music songs, this book embraces the country genre from its earliest roots to the end of 1989. It includes all of the recorded number-one hits from the early 1920s along with notable gospel songs which have become a part of the country music repertory, major fiddle tunes used throughout country music history, and major instrumentals, among others. Each song is documented with essential publishing, licensing, and recording information, including chart placements and notable awards earned. Many entries are annotated either with remarks from the songwriters or historical notes by the author.

The late Dorothy Horstman was involved with country music journalism for more than 20 years. Early publication in magazines such as Country Song Roundup and Country Music led to a weekly radio show on New York’s WNYC-FM, at the time the only country music radio program in the city. Her first book, Sing Your Heart Out Country Boy, was published in 1975. She died in 1999 and this book is her last word on the subject of country music.
Fritzi Horstman is a filmmaker. She lives in Venice, California.

“definitive…not only fills a scholarly gap in popular music history, it also suggest inroads into the critical consideration of the American song-writing and recording industries in the twentieth century”—Reference Reviews. 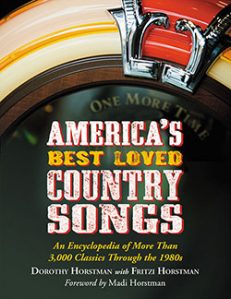