Alexander Pantages was 13 when he arrived in the U.S. in the 1880s, after contracting malaria in Panama. He opened his first motion picture theater in 1902 and went on to build one of the largest and most important independently-owned theater chains in the country. At the height of the Pantages Theaters’ reach, he owned or operated 78 theaters across the U.S. and Canada. He amassed a fortune, yet he could not read or write English. In 1929, he was convicted of sexually assaulting a 17-year-old dancer—a scandal that destroyed his empire and reduced him to a pariah. The day his grandest theater, the Pantages Hollywood, opened in 1930, he lay sick in a jailhouse infirmary. His conviction was overturned a year later after an appeal to the California State Supreme Court, but the question remains: how should history judge this theater pioneer, wealthy magnate and embodiment of the American Dream?

Taso G. Lagos teaches at the University of Washington’s Henry M. Jackson School of International Studies in Seattle and conducts research on diaspora studies, nation branding and sports as religion. 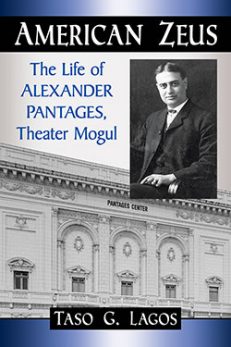