For most of the 20th century, American women had little encouragement to become scientists. In 1906, there were only 75 female scientists employed by academic institutions in the entire country. Despite considerable barriers, determined women have, however, decidedly distinguished themselves.
Three examples: Astronomer Annie Jump Cannon discovered five novas and over 300 other stars. Mathematician and computer scientist Grace Hopper helped invent the COBOL language. Anesthesiologist Virginia Apgar devised the now universally used Apgar score to make a rapid evaluation of a newborn’s condition just after delivery.
Of the 23 American women scientists covered, six were awarded Nobel prizes. Each biography is accompanied by a photograph. A bibliography and an index complete the work.

The late Moira Davison Reynolds, a retired biochemist, wrote about women who made significant contributions to United States culture, including several books about activists, artists, authors and scientists. She lived in Marquette, Michigan.

“excellent…useful”—Feminist Collections; “the style is simple and easily understood, the science that is presented is clear and readily accessible”—Choice; “profiles of 23 of the century’s premier women scientists, representing a wide variety of disciplines…broad scope…useful”—School Library Journal; “a good overview”—Watchung Communications; “academic but accessible”—Scitech Book News; “well worth reading…anyone who buys it now in paperback will feel well rewarded…interesting…well illustrated”—Marquette Mining Journal; “public and school libraries would find it a useful addition to stock. The book is also a useful contribution to the history of science”—Reference Reviews. 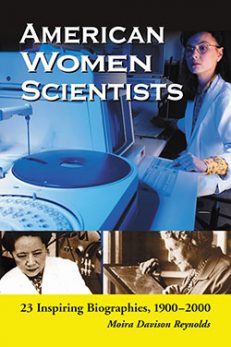