American-Vietnamese Relations in the Wake of War

When the Vietnam War ended with the North Vietnamese capture of Saigon on April 30, 1975—27 months after a cease-fire had been signed in Paris—the differences between the United States and Vietnam were far from being resolved. Mutual bitterness regarding the war remained. Newly unified Vietnam wanted normalization of relations and the subsequent economic reconstruction aid promised in the Paris Peace Accords. Understandably wary of such diplomatic relations, the United States requested information regarding soldiers listed as missing in action and assistance with the repatriation of military remains. A series of misconceptions and misunderstandings as well as changes from a regional to a global U.S. foreign policy left both countries bereft of an easy solution.
This book describes the negotiations during the late Ford and early Carter administrations (1975–1979) and discusses the repercussions the diplomatic stalemate had on the domestic and international politics of the United States and Vietnam, emphasizing the conflicting priorities and political goals of both countries, at home and abroad. This previously neglected period in United States-Vietnam relations deals with issues such as Hanoi’s constant exultation over the victory, American denial of responsibility, the division between the presidents’ public declarations and congressional policies, and both sides’ use of the MIA issue. Based primarily on recently declassified documents and former U.S. official Douglas Pike’s uncensored collection, the work also makes use of media press sources from America, Vietnam, Britain, France and China. Interviews with Vietnamese immigrants and former U.S. politicians provide insight unavailable in written histories. Appendices contain the February 1973 correspondence between President Nixon and the Prime Minister of the Democratic Republic of Vietnam, six diplomatic notes from 1976, and a January 30, 1979, letter from President Carter to Chinese Vice Premier Deng Xiaoping.

I : FORD AND VIETNAM’S PEACE


II : THE ADVENT OF THE CARTER YEARS

• Brzezinski’s Growing Influence and His Visit to China      165 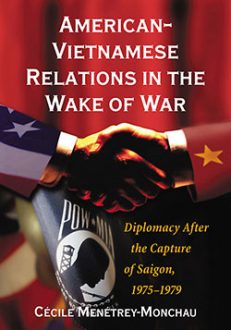 You're viewing: American-Vietnamese Relations in the Wake of War $39.95
Add to cart