American Sea Power and the Obsolescence of Capital Ship Theory

Since the beginning of the 20th century, the United States has sought to achieve Admiral Alfred Thayer Mahan’s vision of “command of the sea” using large battle fleets of capital ships. This strategy has been generally successful: no force can oppose the U.S. Navy on the open seas.
Yet capital ship theory has become increasingly irrelevant. Globally, irregular warfare dominates the spectrum of conflict, especially in the aftermath of 9/11. Fleet engagements are a thing of the past and even small scale missions that rely on capital ships are challenged by irregular warfare.
In a pattern evident since World War II, the U.S. Navy has attempted to adapt its capital ship theory to irregular conflicts—with mixed results—before returning to traditional operations with little or no strategic debate. This book discusses the challenges of irregular warfare in the 21st century, and the need for U.S. naval power to develop a new strategic paradigm.

Dr. R.B. Watts is a retired Coast Guard captain who has written extensively on sea power and contingencies in USNI Proceedings, the Naval War College Review and other professional journals and most recently served as the Coast Guard Chief of Contingency Planning and Exercises before retiring to take a professorship at the National War College, where he teaches courses in war and statecraft, domestic policy, homeland security, military history, and irregular warfare. He lives in Washington D.C.

“Watts does an admirable job of covering the historical basis for his theory…a noteworthy entry into an area that is rarely explored…meticulous research…a worthwhile read”—Center for International Maritime Security. 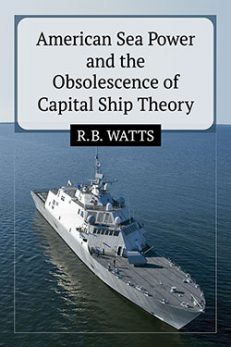 You're viewing: American Sea Power and the Obsolescence of Capital Ship Theory $39.95
Add to cart