The Animal Victims of Our Busy Highways

Slaughtered along our highways, roadkill may be observed regularly, but aren’t likely to be given much thought. Research scientists, animal rights activists, roadkill artists, writers, ethicists and lyricists, however, are increasingly sounding the alarm. They report that we are killing the very animals we love, and are driving many of them to the brink of extinction. Detailing the death and destruction of mammals, reptiles, amphibians, and insect pollinators, this study examines the ways in which we are thus jeopardizing our own futures.

Beginning in the Model T era, biologists counted the common carnage of the time—cottontails, woodchucks, and squirrels, mostly. That record-keeping continues today. Beyond the bleak statistics, zoologists are rerouting migratory paths of animals and are advocating for cat and dog companions. This book illuminates both our successes and failures in keeping animals out of harm’s way and what those efforts reflect about ourselves and our capacity to care enough to alter the road ahead.

Don H. Corrigan is the editor emeritus for the Webster-Kirkwood Times weekly newspapers in St. Louis, where he has written on the outdoors and environment for four decades. He is a professor emeritus of Webster University, where he directed student studies for the school’s Outdoor/Environmental Journalism Certificate. He lives in Fenton, Missouri. 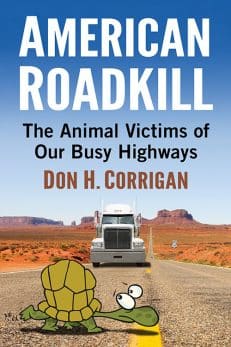