In the wake of the 1919 White Sox scandal and the suspension for life of eight players, baseball saw a precipitous decline in popularity, especially among America’s youth. To combat this, a group of World War I veterans who were members of the newly formed American Legion created an organization to promote teenage interest in baseball. Led by John L. Griffith, who became the first commissioner of the Big Ten Conference, the Legion undertook the revival of baseball. In the 1920s and through the Great Depression and World War II, Legion baseball grew steadily. By 1950 it had become the principal training ground for major league players, boasting at its peak more than 16,000 teams across the country. Tracing the long history of this uniquely American institution, this work details each year’s American Legion World Series and the ups and downs of participation over nearly a century.

William E. Akin is a professor emeritus of history from Ursinus College. His articles have appeared in The Historian, American Quarterly and American Historical Review. He lives in Collegeville, Pennsylvania. 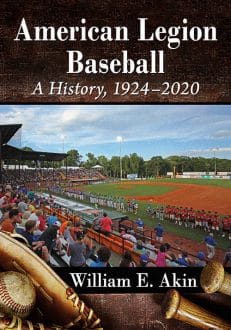