After World War I, there was a great hunger for cars in Britain. Many servicemen had learned to drive and had money from their demobilization grants to spend, but British factories were not immediately able to get back into car production so they looked to America for automobiles. In 1919, two out of every five cars on British roads were Fords built in England, and in 1925, General Motors took over British manufacturer Vauxhall. Hudson also became a prolific assembler during this time and Chrysler built an assembly plant in Kew, west of London.
This book features numerous photographs and commentary on many makes of American cars that could be seen on British roads before the beginning of World War II. Buick, Cadillac, Chevrolet, Chrysler, Dodge, Durant, Duryea, Essex, Ford, Hudson, Jewett, La Salle, Oldsmobile, Overland, Packard, Plymouth, Saxon, Stanley, Studebaker, Stutz and White are among the manufacturers whose cars are included. The author provides a concise description of each automobile he covers, and points out some interesting features and technical details (horsepower and engine size, for example).

Automotive historian Bryan Goodman lives in Surrey, England. He is also the author of American Cars in Europe, 1900–1940 (2006).

“entertaining…splendid…a fascinating glimpse of another world…highly recommended”—The Automobile; “fantastic”—Old Cars Weekly; “fascinating…a delightful introduction to a significant but heretofore neglected aspect of automotive history”—SAH Journal; “if you love looking at new old photos of old cars, you’ll love this book”—Classic Car Club of America; “most interesting…this is a delightful glimpse of a world which few can now remember…very informative…highly recommended”—Classic Car Mart; “fantastic…excellent”—Old Autos; “photographs are quite outstanding in their range of subject matter, as well as in the very high standard of reproduction achieved…well-judged observations…will delight”—Bulletin of the Vintage Sports Car Club. 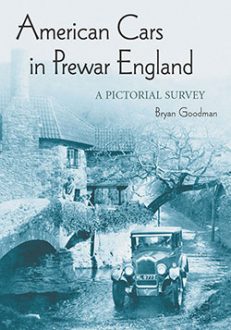 You're viewing: American Cars in Prewar England $39.95
Add to cart