Reinventing His Works for Cinema and Television

In the past two decades, Othello has tried out for the basketball team, Macbeth has taken over a fast food joint and King Lear has moved to an Iowa farm—Shakespeare is everywhere in popular culture. This collection of essays addresses the use of Shakespearean narratives, themes, imagery and characterizations in non-Shakespearian cinema. The essays explore how Shakespeare and his work are manipulated within the popular media and explore topics such as racism, jealousy, misogyny and nationality.
The submissions concentrate on film and television programs that are adaptations of Shakespearean plays, including My Own Private Idaho, CSI-Miami, A Thousand Acres, Prospero’s Books, O, 10 Things I Hate About You, Withnail and I, Get Over It, and The West Wing. Each chapter includes notes and a list of works cited. A full bibliography completes the work; it is divided into bibliographies and filmographies, general studies and essays, derivatives based on a single play, derivatives based on several, and derivatives based on Shakespeare as a character.
Instructors considering this book for use in a course may request an examination copy here.

James R. Keller is a professor and chair of the English and Theatre department at Eastern Kentucky University in Richmond, Kentucky. The author or editor of numerous works about popular culture, he lives in Lexington, Kentucky.
Leslie Stratyner, a professor of English at Mississippi University for Women, lives in Columbus, Mississippi.

2: Imitation as Originality in Gus Van Sant’s My Own Private Idaho      22

3: Shakespeare Transposed: The British Stage on the Post-Colonial Screen      42 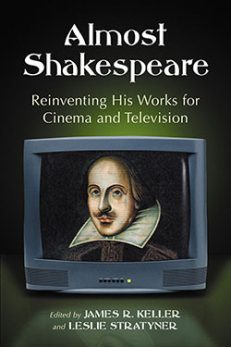