Military and Civilian Consequences of the Attempt to Assassinate Hitler

After Operation Valkyrie—the failed July 20, 1944, plot to assassinate Adolf Hitler and seize control of the German government—both the Third Reich and Hitler came to a violent end. Hitler promised a classless fatherland before he became chancellor and had covertly been liquidating Germany’s elite officer corps long before Stalingrad. Today it is possible to reconstruct and connect important events and biographies of the principle characters to chronicle the disappearance of Germany’s officer class, its nobility and, for a time, its civilian leadership.

Don Allen Gregory is distinguished professor of physics at the University of Alabama in Huntsville.

Preface 1
1. The Beginning of the End 7
2. Prehistory: Assassination Attempts and Resistance Groups 21
3. Investigations and Deceptions 48
4. Courts and Judges 66
5. Trials by Any Other Name 77
6. Suicides, Attempted Suicides and Unexplained Deaths 157
7. Survivors 167
8. The Beginning: A Germany Without Hitler or an Officer Corps 203
9. Epilogue and an Outsider’s Observations 215
Appendix A: German Titles and Military Ranks 225
Appendix B: Prisoners Transferred from Dachau 226
Appendix C: Erika Canaris’ Letter to General William Donovan 231
Appendix D: The Morgenthau Plan 234
Appendix E: The Marshall Speech 238
Bibliography 241
Index 245 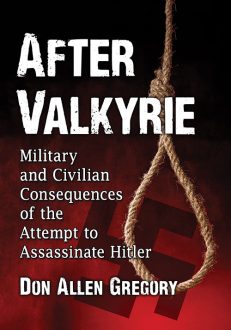