African traditional religion encompasses a variety of non-dogmatic, spiritual practices followed by millions around the world. Some scholars argue it is related to the Nubian religion of Egypt’s Dynastic Period. In an expanded second edition, this book examines the nature of African traditional religion and describes common attributes of various cultural belief systems, with an emphasis on West Africa. Principal elements studied include sacrifice, salvation and culture, modes of revelation, divination, and African resilience in the face of invasion and colonization. The religious experiences of black people throughout the Americas are also covered. The author finds the cosmology, symbolism and rituals of the Yoruba culture to be the fundamental bases of African traditional religion, and draws similarities between the oral and written literature of West Africans and that of New World practitioners. The influence of Islam and Christianity is also discussed. Instructors considering this book for use in a course may request an examination copy here.

Douglas E. Thomas teaches at Lincoln University in Pennsylvania. He lives in Philadelphia.

1. The Sacred Role of Culture in African Religion 17

3. African Tradition and the Culture of Religion 99

4. African Culture and the Philosophy of Religion 154

5. African Religion in the New World 206

“Marked by strong, clear Afrocentrism, the book argues for understanding both the external factors that have divided Africans throughout the world and the internal factor that can bring them strength through a common identity and historical heritage…recommended” —Choice. 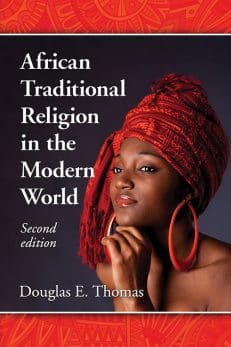