Slavery, Freedom and the West

The African American presence in St. Louis began in 1763 with the arrival of several free men of color who accompanied Pierre Laclede from New Orleans to set up a fur trading fort on the Mississippi. Within a few decades, the fort had become a prosperous commercial center whose proximity to the western frontier attracted a cosmopolitan community.
African Americans in St. Louis—both slave and free—enjoyed greater autonomy and opportunity than those in urban areas of the South and East. Slaves in the city set legal precedent by filing hundreds of freedom suits, often based on the prohibition against slavery set by the Northwest Ordinance of 1787. After a century in the region, many blacks enlisted in the Union Army during the Civil War. Drawing on a wide range of sources, the author studies the history of slaves and free blacks in this city.

Dale Edwyna Smith earned a doctorate in history of American civilization at Harvard University. Her previous publications include The Slaves of Liberty. She lives in Boston, Massachusetts. 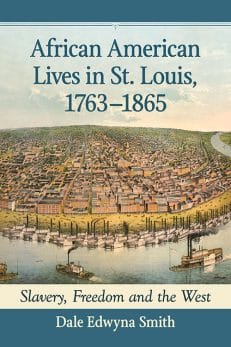