Faith Journeys of a Gay Priest

In 1980s America, coming out as gay as a father and husband was a significant journey for anyone to make. Coming out as gay as a priest guaranteed immersion into controversy, contradiction, and challenge. This book tells of the Reverend Canon Ted Karpf’s navigation of new social and romantic journeys, all within the context of his priestly vocation in the Episcopal Church.
Covering from 1968 to 2018, Karpf recounts his vivid memories, life-changing dreams and resonant reflections on living a life of faith in a socially and politically tumultuous period. His narratives are crafted as poetic meditations on enduring values and meaning, which can remind any reader that we are neither abandoned nor alone, and that forgiveness is a fulfilling way of living in a world of contradictions.

The Reverend Canon Ted Karpf is an Episcopal priest and public health expert, certified Gestalt therapist and adjunct faculty at Boston University School of Theology. He is an international human/gay rights activist and resides and offers spiritual direction in Northern New Mexico.

• “Ted Karpf is an international journeyman of hope. Acts of Forgiveness: Faith Journeys of a Gay Priest offers a rare glimpse into the life of a man who in the face of death, betrayal, and loss has been given every reason to abandon the God who loves him and yet he pilgrimages onwards. More than a memoir, Ted’s testament to the power of grace shows how abiding faith neither leaves nor abandons God but finds hope in the unavoidable tensions of the life we all share.”—The Reverend Joshua Case, Associate Rector, Christ Church, Charlotte, North Carolina

• “Karpf promises to ‘turn the dross of my life into gold,’ and keeps that promise with vulnerability, insight, and compassion for himself and others. He meticulously spins out the tale of his life, giving us a healthy reminder at every turn that God is to be found in the most unlikely of places. It is clear, in this reflection on his life, that he has indeed learned that skill and executes the task of seeing and hearing the world with precision, insight, and clarity.”—The Right Reverend Gene V. Robinson, former Bishop of New Hampshire

• “Ted Karpf’s life journey embodies Michelangelo’s working vision: ‘I saw the angel in the marble and carved until I set him free.’ That symbolizes the splendid arc of Karpf’s life—an evolution from unformed possibility, through great trials, to a loving, forgiving, contributing member of humanity. Karpf’s implicit message of hope is urgently needed in our wayward era. Inspirational autobiography at its best.”—Barbara Montgomery Dossey, PhD, RN, FAAN, author of Holistic Nursing and Larry Dossey, MD, author of One Mind: How Our Individual Mind Is Part of a Greater Consciousness and Why It Matters

• “Artfully told narratives that challenge the reader and—at the same time—call us into companionship with the author are infrequently encountered, treasured widows into the soul. Acts of Forgiveness is exactly such a treasure. It reminds us all that forgiveness is a way of life, which ultimately calls each of us to become seekers of justice for all people.”—Joel T. Katz, MD, MACP, and Marshall A. Wolf, MD, distinguished chair in medical education, Harvard Medical School

• “Acts of Forgiveness: Faith Journeys of a Gay Priest is a beautiful work reminding again that there is no future without forgiveness; there is no faith without love. This book animates these truths through a poetic documented legacy.—Desmond Mpilo Tutu, Archbishop Emeritus, Anglican Church of Southern Africa 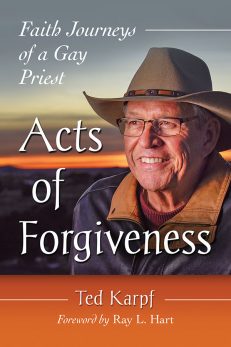 You're viewing: Acts of Forgiveness $19.99
Add to cart