Abu Ghraib After the Scandal

In March 2003 the United States military launched an invasion of Iraq. Months afterwards rumors began circulating about human rights violations in military prison facilities throughout occupied Iraq. In January 2004, an Army MP serving in Abu Ghraib Prison left a disc containing photographs of prisoner abuse on the bed of a military investigator. The photographs were infamous the moment they came to public attention, and the face of the Iraq War was re-drawn to be that of sadistic American soldiers. However, soldiers have lived and bled and died protecting the human rights of detainees at Abu Ghraib. The present work details the courage, resolve, and mercy of the soldiers of the 344th Combat Support Hospital, Army reservists from New York who were also present at the Twin Towers scene on September 11, 2001. 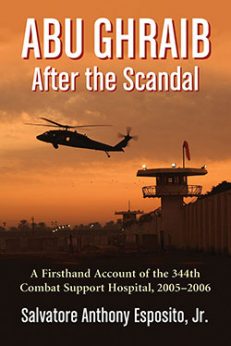 You're viewing: Abu Ghraib After the Scandal $25.00
Add to cart