A Year in Command in Afghanistan

During his 2009–2010 combat tour in Afghanistan, battalion commander Lt. Col. Michael J. Forsyth kept a daily journal. In it he candidly wrote about his daily interactions with the Afghan government, citizens, security forces, and his intermittent conflict with the enemy. As the deployment progressed, the journal reveals that his initial expectations for peace in Afghanistan were tempered by his experiences and encounters. In the process, Col. Forsyth learned critical lessons in leadership and changed his thinking about realistic goals that can be accomplished in Afghanistan. The journal, and its subsequent annotations, also provides a glimpse into how the U.S. Army functions at the unit level and what America’s soldiers do on a daily basis.

Colonel Michael J. Forsyth (U.S. Army) formerly commanded the 196th Infantry Brigade and now serves as chief of staff of the Alaskan Command and is a Ph.D. candidate at the Royal Military College of Canada. He writes articles for Gettysburg Magazine, Field Artillery Journal, Small Wars Journal and Military Review. 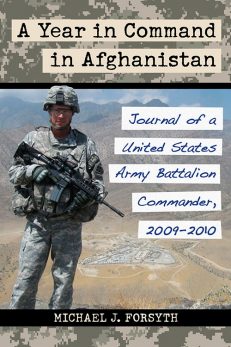 You're viewing: A Year in Command in Afghanistan $25.00
Add to cart