An American Missionary's Diary with 129 Photographs

A fascinating glimpse of life in Japan in 1920 as experienced through the eyes of an observant and sensitive American missionary whose travels took him beyond Tokyo to the mountainous Tohoku region and to the cities of Sendai, Kobe, and Osaka.
Vivid descriptions of life in the slums and the powerless position of women are juxtaposed with an account of a meeting with the last Shogun of Japan. Conversations with a wide variety of people revealed to the Rev. Minton the stirrings of war sentiment even in 1920. The photographs offer a superb visual record.

The late Rev. Wilson P. Minton was born in 1888 in Covington, Ohio, and ordained in 1910. His long and varied ministry culminated in Philadelphia. He left his diary and and glass negatives of his photographs (color and B&W) to his grandson, David W. Carstetter, an attorney in Jacksonville, Florida. 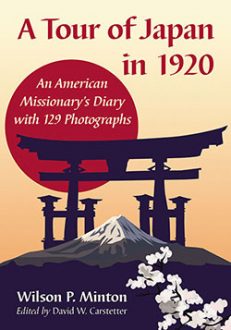