Inside the OSS with an American Agent in Europe

Here is the wartime diary of Wayne Nelson, an OSS officer who served in North Africa and Europe during World War II. A prewar colleague of Allen Dulles, Nelson joined an infant OSS after failing to join the Navy because of a vision disability, and he went on to serve in North Africa, Sicily, Sardinia, Italy, Corsica, and mainland France. Erudite and a skilled writer, Nelson captured intriguing observations about some of the most important spy operations of the war, and his diary entries offer a thrilling, readable and informative glimpse into the life of a spy during World War II.

The late Wayne Nelson, a former actor and playwright, earned a Bronze Star and France’s Croix de Guerre for his service with the OSS during World War II. He also served the CIA in Washington, Turkey, Greece, South Korea and West Germany. 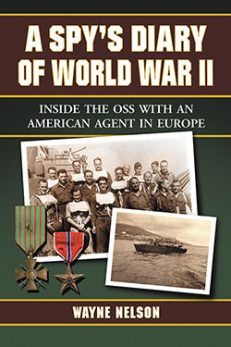