A Spy for the Union

The Life and Execution of Timothy Webster

Timothy Webster, best known for his work as a spy for the Union during the Civil War, began his career as a New York City policeman. In the mid–1850s he left the police department and took a job for Allan Pinkerton with his newly formed detective agency. As an operative for Pinkerton’s agency, Webster excelled. His cases included tracking a world famous forger, investigating grave robberies in a Chicago cemetery, and seeking to uncover a plot to destroy the Rock Island Bridge. It was also as a Pinkerton detective that Webster made his greatest contribution to his country when he was part of a small group of operatives that uncovered a plot to assassinate then President-elect Abraham Lincoln in 1861. Webster went on to serve the United States as a spy in the Civil War. He traveled to the Confederate Capital multiple times and made many connections high up in the Confederate military and government. For a time he was the Union’s top spy, but his career came to an abrupt end when, in 1862, he was betrayed by fellow spies and became the first spy executed in the Civil War.

Corey Recko has written articles on a variety of historical topics for websites, magazines, and historical journals. He lives in Lakewood, Ohio.

1. From Newhaven to Princeton 7

6. Plot to Assassinate the President-elect 49

Appendix I: Timothy Webster’s Testimony in Front of the New York City Board of
Aldermen, 1855 139

“Civil War spy stories are not that common. Corey Recko has helped fill the gap… Just about everyone will find something to like in this tale of Civil War espionage that mixes in portions of heroism, intrigue, cowardice and betrayal.”—Civil War News 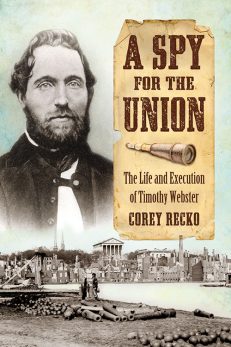