Controversial yet beloved among audiences, Christmas-themed horror movies emerged in the early 1970s and gained a notorious reputation with Silent Night, Deadly Night (1984), depicting Santa as an ax-wielding maniac. Some parents and conservative groups condemned the film, while others embraced the portrayal of Yuletide as a backdrop for fear and dread. Drawing on interviews with directors, producers, special effects artists, photographers and actors, this book celebrates the sordid, colorful history of the Christmas horror subgenre. Psycho Santa films such as Christmas Evil (1980) and 3615 code Père Noël (1989) are examined, along with “Yule-Die” slashers like The Dorm that Dripped Blood (1982), Black Christmas (1974) and Silent Night, Bloody Night (1972). Commercial successes like Gremlins (1984) and Rare Exports: A Christmas Tale (2010) are covered, as well as more recent releases such as Better Watch Out (2016), Red Christmas (2016) and Deathcember (2019). Rare photographs, promotional materials and an annotated filmography are provided.

Matthew C. DuPée is an author and horror film enthusiast who lives in the Washington D.C. metro area. His wide array of works have been published in Rue Morgue, Offscreen, Bright Lights Film Journal, and Morbidly Beautiful.

• “Be it It’s a Wonderful Life or Miracle on 34th Street to more recent classics like Home Alone and Elf, there is a certain ‘type’ of narrative that comes to mind when we think of Christmas films. Less common in our casual and scholarly examinations of such movies are those where themes of love, family and goodwill to all men are completely sidelined in favour of blood, guts and gore. It is the genre of Christmas horror—replete with satanic Santas, evil elves and lashings of holiday fear—that Matt DuPée focuses on in A Scary Little Christmas. Delving into over 40 years of holiday hellscapes, DuPée chronicles the subversion of the Christmas story through a comprehensive exploration of over 200 titles. This book is a must-read for those wanting to eschew the mawkish and heartily embrace the scary, the savage and the splatter.”—Associate Professor Lauren Rosewarn, author of Analyzing Christmas in Film: Santa to the Supernatural

• “A Scary Little Christmas is both an essential reference guide that exhaustively catalogs five decades of Noel nasties, and an entertaining slay ride through an ever-expanding sub genre of seasonal shockers. Horror fans are gonna love unwrapping this one.”—Dave Alexander, author of Untold Horror and former Editor-in-Chief of Rue Morgue magazine

• “Horror movies make the perfect counterbalance to wholesome holiday fare—it’s a clean, white snowdrift where a spray of blood appears all the more strikingly—and Matthew DuPée has taken a deep plunge into the creepiest and scariest films the season has to offer.”—Alonso Duralde, author of Have Yourself a Movie Little Christmas and co-author of I’ll Be Home for Christmas Movies

• “Matthew DuPée’s A Scary Little Christmas puts the ghoul in yule. It’s a fantastic look at the darker side of cinema dealing with the most wonderful—and evidently deadliest—time of the year. Psycho Santas, gremlins, Krampus and much more. DuPée delves into everyone’s favorite festive fears in an in-depth but accessible and fun way. With fascinating behind-the-scenes stories and interviews with many of those involved. If you can survive until next Christmas, you want this on your gift list.” —JA Kerswell, author of The Teenage Slasher Movie Book and curator of The Hysteria Continues Podcast. 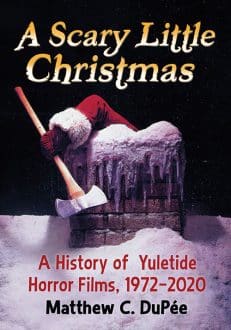 You're viewing: A Scary Little Christmas $49.95
Add to cart