A Rainbow Division Lieutenant in France

The World War I Diary of John H. Taber

Lieutenant John Huddleston Taber was a New Yorker assigned to the 168th “Third Iowa” Infantry Regiment of the American Expeditionary Force’s 42nd “Rainbow” Division during World War I. His diary provides a detailed narrative of a young officer maturing through his war experiences, from the voyage across the submarine filled Atlantic, to training in France, to front line combat. In a clear, unaffected voice, Taber records his dealings with superiors and enlisted men, billets in French and German towns, life in the trenches, intense shelling, machine gun fire, gas warfare, leaves to Paris, the occupation of Germany, and his return to New York.

John H. Taber graduated from Columbia University in 1917 and was attached as a second lieutenant to the 168th Infantry (Iowa) of the Rainbow Division in World War I. He published a history of the 168th in 1925. He passed away in New York City in 1986.

Stephen H. Taber, the second cousin of John H. Taber, is a financial specialist on Brazil. He lives in Boston, Massachusetts. 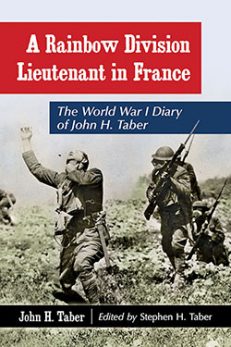 You're viewing: A Rainbow Division Lieutenant in France $29.95
Add to cart