A Day in Hell on the DMZ

At “zero dark thirty” on January 30, 1971, units of the U.S. Fifth Mechanized Division left their firebases along the DMZ heading west along Provincial Route 9. The mission, called Dewey Canyon II, was to reopen the road from Khe Sahn Air Base to the Laotian border, in support of a South Vietnamese invasion of Laos (doomed from the start) to cut off the Ho Chi Minh Trail. Alpha Company of U.S. 61st Infantry performed commendably in keeping Route 9 open, with just one casualty killed by friendly fire. They returned to Firebase Charlie-2 in April, exhausted but hopeful—the Fifth would be leaving Vietnam in July. They patrolled the “western hills” through May as rocket attacks fell each evening. On the 21st, a direct hit on a bunker killed 30 of the 63 men inside—18 were from Alpha Co. This is their story, as told to Specialist Lou Pepi by members of his unit.

Lou Pepi was drafted into the Army in March of 1968. Returning from Vietnam he worked in the construction field and then in building code and zoning enforcement. He lives in West Boylston, Massachusetts. 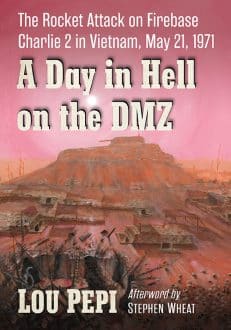