A Critical History of Soul Train on Television

As a wildly popular local dance show, Soul Train provided a venue for Chicago’s soul singers and political activists and gave African American teenagers their first significant chance to see and identify with their peers on television. The subsequent national series garnered even more popularity, establishing producer and host Don Cornelius as one of the most successful pioneers of African American television production. This work discusses Cornelius’s role in the evolution of his groundbreaking series from a small, all-black 1970s television show to a lucrative brand name applying not only to the program, but also to awards and various merchandise in the present day.
The first two chapters focus on Cornelius’s years in Chicago and the initial launching of Soul Train in 1970. The next two chapters explore how the nationally televised, California-based version of the show rose steadily in both popularity and cultural influence among primarily African American viewers, and how Cornelius himself became a rising celebrity during that time. The final chapters illustrate Cornelius’s efforts in branching out beyond the dance show through various music-related business ventures, including the Soul Train Music Awards. The work includes interviews with several former cast members and guests, along with a complete chronology of the series and Cornelius’s other professional ventures.

Christopher P. Lehman is a professor of ethnic studies at St. Cloud State University in St. Cloud, Minnesota, and the author of three books about American popular culture.

3. “People All Over the World”

4. “The Hippest Trip in America”

Appendix A. Recurring Guests on the Syndicated Soul Train      199

“a complete and comprehensive look at the television program and its effects on black culture, and American culture as a whole…a top pick for community library collections”—The Midwest Book Review; “takes readers deep into the show’s history and evolution…chronicles the show’s rise in popularity and cultural influence…exhaustive…complete”—NewsOK.com; “Readers with memories of Soul Train or an academic commitment to the study of popular culture will find a thoughtful, well-researched, and insightful commentary about this cultural phenomenon. This book provides an excellent starting point for continued discussion and study of a television show that was once heralded as ‘the hippest trip’ in America”—Dance Chronicle; “Soul Train deserves a lot of credit for bringing images of young African-Americans and their dancing styles, musical tastes and clothing styles to a national audience”—Star Gazette. 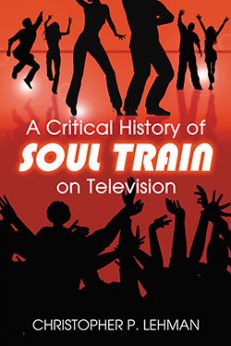 You're viewing: A Critical History of Soul Train on Television $29.95
Add to cart