A Confederate in Congress

In May 1865, the final month of the Civil War, the U.S. Army arrested and prosecuted a sitting congressman in a military trial in the border state of Maryland, though the federal criminal courts in the state were functioning. Convicted of aiding and abetting paroled Confederate soldiers, Benjamin Gwinn Harris of Maryland’s Fifth Congressional District was imprisoned and barred from holding public office.
Harris was a firebrand—effectively a Confederate serving in Congress—and had long advocated the constitutionality of slavery and the right of states to secede from the Union. This first-ever book-length analysis of the unusual trial examines the prevailing opinions in Southern Maryland and in the War Department regarding slavery, treason and the Constitution’s guarantee of property rights and freedom of speech.

Joshua E. Kastenberg is an active duty officer in the United States Air Force with more than twenty years of service. He is assigned to the Judge Advocate General’s Corps as a military judge. He lives in Albuquerque, New Mexico. 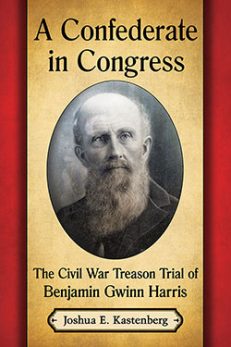 You're viewing: A Confederate in Congress $29.95
Add to cart