A Christmas Carol and Its Adaptations

Over 150 years after its original composition, Charles Dickens’ A Christmas Carol continues to delight readers. The figure of Ebenezer Scrooge has become a cultural icon, and Tiny Tim’s “God Bless Us Every One” is as familiar as “Merry Christmas.” It is not surprising that Dickens’ “ghostly little book,” as he called it, has proved popular with playwrights and screenwriters. In everything from elegant literary treatments to animated musicals, the role of Scrooge has been essayed by actors from George C. Scott to Mr. Magoo.

This critical account of the story’s history and its various adaptations examines first the original writing of the story, including its political, economic, and historical context. The major interpretations are analyzed within their various media: stage, magic lantern shows, silent film, talkies, and television. Dickens’ other, lesser known Christmas stories, like “The Cricket on the Hearth,” are also examined and compared to the immortal Carol. Finally, a complete annotated filmography of all film and television productions based on A Christmas Carol is included, with commentary on each version’s loyalty to the original text. The book includes 25 previously unpublished photos as well as analysis of previously undocumented productions. The text includes a foreword by the distinguished film and literary scholar Edward Wagenknecht, a bibliography and an index.

Fred Guida is the author of the blog www.charlesdickensonscreen.com. He is also a film consultant and programmer at the Yale Center for British Art in New Haven, Connecticut, and has taught film studies at Quinnipiac University and Connecticut College. 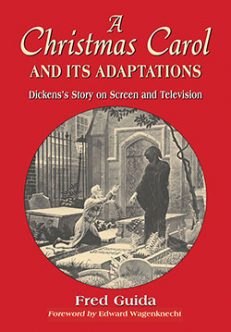 You're viewing: A Christmas Carol and Its Adaptations $29.95
Add to cart