A Brief History of Oral Sex

The ancient Greeks and Romans considered it degrading to both parties yet depicted it prolifically in art and literature. The Early Christian Church called it “the worst evil,” punishable by seven years of penance and fasting (murder was one year). Nearly all of the 13 original American colonies had laws against it—except Georgia. A Victorian handbook for young brides advised how to “dampen his desire to kiss in forbidden territory.” Attitudes about oral sex have varied through the centuries and across cultures—a death sentence in some nations, a religious practice in others. This book explores its history as well as its impact on world events.

David DePierre is a college professor in New Jersey, teaching courses on American history, Asian history, and anthropology. He has previously written books on military history, Chinese history, and the role of disease in history.

“Traces the history of oral sex, with emphasis on the overall view of the practice by various cultures and anecdotes that show times when it altered the history of people or nations”—ProtoView. 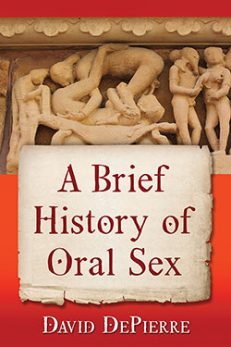