A Badge, a Gun, an Attitude

During his 25 years with the Los Angeles County Sheriff’s Department, Dean Scoville advanced from nervous recruit to silver-tongued spokesperson to seasoned patrol sergeant. His candid memoir chronicles the personal experiences of police work—the tedium of guarding jail inmates, the consternation of shoot/don’t-shoot scenarios, the trauma of being wounded in the line of duty—and offers an insider’s view of iconic moments in law enforcement, including the capture of “Night Stalker” Richard Ramirez and the 1992 L.A. Riots. Along the way he examines a profession increasingly beleaguered by inimical agendas, administrative cowardice and fiscal restraints.

Dean Scoville worked a wide variety of assignments during his 25-year career with the Los Angeles County Sheriff’s Department. Later he worked as an associate editor for Police magazine and authored the award-winning Shots Fired column for the magazine. 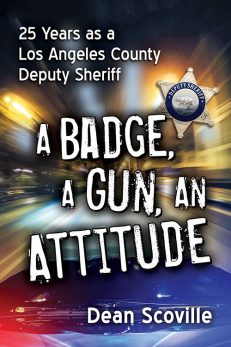