The Rochambelles on the World War II Front, rev. ed.

Women in an armored division! General Leclerc had never heard of such a thing. But if he wanted the 19 brand-new ambulances, he would have to take their women drivers too. Known as the Rochambelles, their courage won the admiration of their comrades and changed many minds. These women learned to drive through mortar fire, to pull men from burning tanks, to stanch blood and ease pain. Above all, they learned that no matter who was doing the shooting, the greater enemy was hatred. Only three of the fifty-one women who served in the group published a memoir, and their stories have been all but lost. This book, newly revised and updated, reveals their daring and accomplishments, from Normandy to Berchtesgaden.

Ellen Hampton is an author, historian and former lecturer in history at Sciences Po, based in Paris, France. She has written articles, books and documentary film scripts on the two world wars. 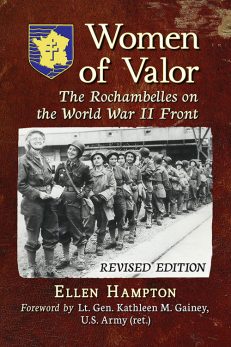