For more than seven decades, homing pigeons provided the U.S. military with its fastest most reliable means of communication. Originally bred for racing in the early 1800s, homing pigeons were later trained by pigeoneers to fly up to 60 mph for hundreds of miles, and served the United States for almost 75 years, through four wars on four continents. Barely weighing a pound, these extraordinary birds carried messages in and out of gas, smoke, exploding bombs and gunfire. They flew through jungles, deserts and mountains, not faltering even when faced with large expanses of ocean to cross. Sometimes they arrived nearly dead from wounds or exhaustion, refusing to give up until they reached their objective.
This book is the first complete account of the remarkable service that homing pigeons provided for the American armed forces, from its fledgling beginnings after the Civil War to the birds’ invaluable role in communications in every branch of the U.S. military through both World Wars and beyond. Personal narratives, primary sources and news articles tell the story of the pigeons’ recruitment and training in the U.S., their deployment abroad and use on the home front.

Elizabeth Macalaster has co-authored award-winning nonfiction books for children and young adults, and her articles and book reviews have appeared in many magazines and newspapers. She lives in Brunswick, Maine.

Appendix A. Instructions on Reception, Care and Training of Homing Pigeons in Newly Installed Lofts at U.S. Navy Air Bases 167

Appendix B. Henri Marion’s Patent for a Message Holder 176 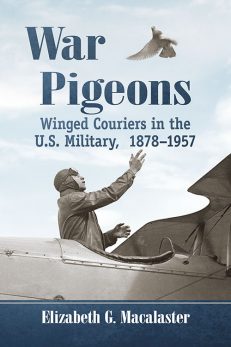