The Body Onscreen in the Digital Age

Essays on Voyeurism, Violence and Power

This collection examines the peculiarly modern phenomenon of voyeurism as it is experienced through the digital screen. Violence, voyeurism, and power populate film more than ever, and the centrality of the terrified body to many digital narratives suggests new forms of terror and angst, where bodies are subjected to an endless knowing look. The particular perils of the digital age can be seen on, by, and through screen bodies as they are made, remade, represented, and used. The essays in this book examine the machinations of voyeurism in the digital age and the realization of power through digital visual forms. They look at the uses of power over the female body, at the domination and repression of women through symbolic violence, at discourses of power as they are played out onscreen, and at how the digital realm might engage the active/passive dichotomy in new ways.

Susan Flynn is the director of Educore, the education research center of the Institute of Technology, Carlow, Ireland, an associate researcher at University College Dublin and a Fellow of the Higher Education Academy in the United Kingdom. She specializes in digital screen culture, equality and pedagogy.

Section One: Violence
Culling Human Bycatch in They Remain
Brian Zager 15
“Women always have to put up a fucking fight”: Examining Anthropocene Feminism and Surveillance in Coralie Fargeat’s Revenge
Lisa Ellen Williams 33
Remnants of the Witness: Torture and Testimony in Pascal Laugier’s Martyrs (2008)
David Shames 46
“All the better to see you with”: Found Footage, Camera Consciousness and Deleuzian Event in Contemporary Demon Possession Horror
Máiréad Casey 64

Section Three: Power
The Spectator That Shoots Back: Fragmentary Image in Farocki and Fast as a Counter-Visual Weapon
Boris Ružić 137
While Hollywood Fiddles … Alienation in Contemporary Cinema
Russell Manning 155
Of Art and Science: The Body, the Gaze and Intermedial Aesthetics in the Cinema of Pedro Almodóvar
Abigail Keating 172 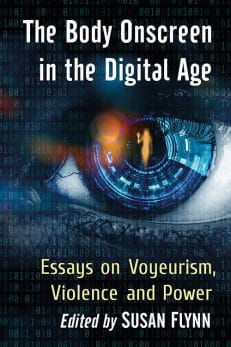 You're viewing: The Body Onscreen in the Digital Age $55.00
Add to cart