The 1930 baseball season was unlike any other. Big league rosters included more Hall of Famers than at any time before or since. “The year of the batter” saw an extraordinary number of records set for runs, hits, home runs and RBIs. Nine of the 16 teams hit over .300 and so did 60 percent of the regular players. Seven pairs of teammates hit .350 or better and 20 batters had over 200 hits. Hack Wilson had a record 191 RBIs and five others topped 150; both leagues’ batting races came down to the last game of the season.
The pennant races provided great drama as well. In the National League, the Cardinals overcame a fourth place 12-game deficit in the final weeks of the season to win a four team, down-to-the-wire race. In the American League, underdog Washington battled injuries, misfortune and tragedy to challenge the heavily-favored Athletics.
For the first time, this remarkable season is covered in full, from spring training to the final out of the World Series.

Ray Zardetto, a member of the Society for American Baseball Research, has written for a number of baseball publications and is a contributing writer to www.baseball-almanac.com. He lives in Flemington, New Jersey. 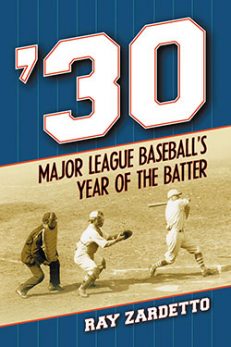