View cart “War Imagery in Women’s Textiles” has been added to your cart.

Through the centuries, women have used textiles to express their ideas and political opinions, creating items of utility that also function as works of art. Beginning with medieval European embroideries and tapestries such as the Bayeux Tapestry, this book examines the ways in which women around the world have recorded the impact of war on their lives using traditional fabric art forms of knitting, sewing, quilting, embroidery, weaving, basketry and rug making. Works from the United States, Canada, Latin America, Asia, the Middle and Near East, and Oceania are analyzed in terms of content and utility, and cultural and economic implications for the women who created them are discussed.
Traditional women’s work served to document the upheaval in their lives and supplemented their family income. By creating textiles that responded to the chaos of war, women developed new textile traditions, modified old traditions and created a vehicle to express their feelings.

Deborah A. Deacon is an art historian and retired navy commander who resides in Arizona. She has curated exhibitions on women’s textiles and war, photography, and Japanese anime and manga.
Paula E. Calvin is an art historian and a board member of the National Docent Symposium Council. She was previously an urban planner and a board member of Women’s Transportation Seminars. 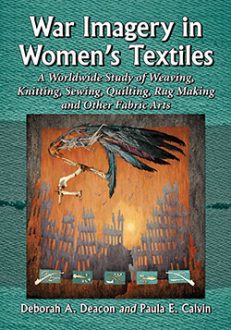 You're viewing: War Imagery in Women’s Textiles $49.95
Add to cart