The Genesis and Impact of a Political Faith

Nazism was deeply rooted in German culture. From the fertile soil of German Romanticism sprang ideas of great significance for the genesis of the Third Reich ideology—notions of the individual as a mere part of the national collective, and of life as a ceaseless struggle between opposing forces.

This book traces the origins of the “political religion” of Nazism. Ultra-nationalism and totalitarianism, racial theory and anti–Semitism, nature mysticism and occultism, eugenics and social Darwinism, adoration of the Führer and glorification of violence—all are explored. The book also depicts the dramatic development of the Nazi movement—and the explosive impact of its political faith, racing from its bloody birth in the trenches of World War I to its cataclysmic climax in the Holocaust and World War II.

Carl Müller Frøland holds an MA in intellectual history from the University of Oslo and is working on a PhD dealing with religious and secular aspects of the Nazi worldview. He lives in Oslo, Norway.

John Irons holds a PhD in literature from Cambridge University and has translated more than 100 books from various European languages into English. He lives in Svendborg, Denmark.

Part I. The Organic and the Dynamic: Two Aspects of German Romanticism
1. The Demonic Source of Energy: Genius Worship and Nature Mysticism in Sturm und Drang 16
2. A Drop in the Ocean of Omnipotence: Herder’s View of God 22
3. The Struggling World Organism: Schelling’s Philosophy of Nature 26
4. The Continual Advance of the Race: Fichte’s Nationalism 32
5. Two Romantic ­Idea-Complexes 41

Part III. The Dynamic Will: The Emergence of Vitalism
10. The Blind Will to Live: Schopenhauer’s Metaphysics of the Will 78
11. Dionysian Energy: Nietzsche’s Glorification of Creation and Destruction 82
12. From the Cultivation of the Superman to the Glorification of War: The Development of a Lebensphilosophie 91
13. The Ecstatic Steel Warrior: Ernst Jünger’s Romanticism of Violence 98

Part V. Manifestations of the Führer Cult
21. Collective Ecstasy: The Nuremberg Rallies 162
22. Charismatic Authority: The Bond Between Führer and People 167
23. Polycratic Energy: Institutional and Individual Rivalry 172
24. Political Mysticism of the Will: The Cult of the Führer as a Political Religion 180

Part VI. The Black Corps: SS—Ideology and Practice
25. A Link in a Fighting Chain: The SS System of Beliefs and Order Structure 190
26. The Tentacles of the Octopus: The New Police State 202
27. Cleansing Violence: The “Task Forces” in Eastern Europe 211
28. A Genocide Takes Form: The Wannsee Conference and Nazi Antisemitism 229
29. Genocidal Yearning for Paradise: Industrial Mass Murder at Auschwitz 234
30. The Therapy of Extermination: Medical Experiments at Auschwitz 242
31. The Flashing Sword: The ­Waffen-SS in Battle 251

Part VII. The Conceptual Universe of Nazism
32. Ragnarok: The Cataclysmic End to Nazism 262
33. Movement from the Bonds of Blood: Nazism in the Light of the History of Ideas 271

• “It is a valuable addition to the historiography of Nazi Germany, one that nicely bridges the gap between Nazism as an ideology and Nazism in practice and as policy. … Recommended”—Choice

• “It is an impressive intellectual work that the author has accomplished.”—Clio-historiska boknyheter (Sweden)

• “It is with excitement I have read Carl Müller Frøland’s book… I am excited because it is so liberating to see a young academic embark on a project of such scope—and succeed with it…. I am excited because the book touches upon important questions of how we can understand Nazism and The Third Reich.”—Anders G. Kjøstvedt, Associate Professor, PhD in History, Faculty of Education and International Studies at Oslo Metropolitan College

• “One of the most important books this fall [2017] shows how central ideas from the intellectual history of Europe were converted into an aggressive philosophy of murder…. The history teacher and the politician who does not read this book commits negligence in service…6 out of 6 stars”—Bernt Hagtvet, Professor Emeritus of Political Science at the University of Oslo, Professor in International Studies at Bjorknes University College, and former Visiting Professor, European Studies Council, Yale Macmillan Center

• “Undoubtedly, this debut book is a masterpiece in many ways, and will stand for a long time as a text which is hard to ignore…. When Frøland brings us into the intellectual world of Nazism, he makes it easier to understand why this ideology could fascinate.”—Dag Einar Thorsen, Professor of Political Science at the University of Southeast Norway

• “Ideas that one could solve social problems by eradicating certain peoples groups existed long before 1940. In this context, Carl Müller Frøland’s book can be recommended.”—Prosa

• “Carl Müller Frøland effectively dissects the ideology of Hitler’s brand of national socialism, linking it backward to its philosophical roots in German Romanticism, as well as forward to its implementation and practice by the Third Reich once established in 1933…. a challenging yet stimulating examination that clarifies the meaning of Nazism given its historical context…. Understanding Nazi Ideology is recommended for specialists and would be ideal as a graduate-level text…. effectively providing new insight and conceptual ways of thinking about Nazism and its place in twentieth-century political thought. For those interested in an objective, unbiased view of the historical roots of Nazism, the author has provided a valuable service.”—Military Review

• “[Frøland’s] book on ideology is probably the most elaborate in world literature, but in a completely innovative way…. The book is a history of ideas and practices that have turned the system of thought into vicious politics. Frøland showed how it is possible for ideology to seduce large masses of educated and disciplined people, how such people have accepted the idea that the way out is to liquidate large groups of people. It is precisely after this relativization of evil that the book is current.”—Jutarnji

• “[A]n excellent confirmation of how eternal, inexhaustible, always provocative and controversial this topic is, and how, within a given framework, thoughtful, persistent, critical research work can offer the interested public ‘new keys’ to understanding and questioning ideas and content. which even today in many ways burden modern man and his world…brilliant…masterfully maneuvering through extensive literature and hitherto lesser-known theoretical paths…a major guide for understanding a dark epoch, which speaks not only of what was, but also of what can easily be repeated”—Novi List (Croatia)

• “Despite the popularity of studying Nazi Germany…there are few examples of this sort of analysis. …a whistle-stop tour of the great,and not-so-great, philosophers and thinkers…carefully dissecting their ideas before weaving the relevant strands together to show how Nazi ideology was formed. The beauty of this approach is that it is comprehensive and coherent,allowing the reader to understand the genesis of Nazi ideology as a whole…an excellent description of the roots of Nazi ideology…Coming from a history of ideas rather than a history of Nazism perspective, Understanding Nazi Ideology gives a fresh and valuable point of view…important …His [Frøland’s] synthesis of the ideas that formed Nazism, of the events that made Nazism adapt, and of the people who led the movement, is detailed and convincing, turning the contradictory elements of the ideology into a coherent set of quasi-religious beliefs. …he really has helped the reader—be they members of the general public or of academia—better understand the essence of Nazi ideology.”—Get History

• “Conceptions implying that one could solve social problems by exterminating certain groups of people existed long before 1940. In this context, Carl Muller Froland’s Nazismens ideunivers can also be recommended”—Espen Sobye, philosopher and literary critic

• “A unique account of Nazism from the perspective of the Nazis themselves—a monstrous project through the monster’s eyes….In our time of political divisions and the strengthening of extremism on both sides of the socio-political spectrum, this book is more topical than ever”—The Croatian Literary Translators’ Association

• “Frøland is a Norwegian, young, he wrote a book about an ideology that is probably the most elaborated topic in world literature, but he did it in a completely innovative way. Hitler’s intellectual horizon was an integral, not an exceptional, part of the German history of ideas, with roots in Romanticism and ideas evolving after 1790. To this, Nazism added biologism. The book is a history of ideas and practices that have turned the system of thought into vicious politics. Frøland shows how it is possible for ideology to seduce large masses of educated and disciplined people, and how such people accepted the idea that the solution is to annihilate large groups of people. It is precisely this relativization of evil that makes this book so topical; hardly anything more important can be found at this moment.”—Tvrtko Jakovina, Professor of History at the University of Zagreb, lecturer at the Diplomatic Academy in Zagreb and guest lecturer at the Istituto per l’Europa centro-orientale e balcanica, University of Bologna

• “I wholly recommend this as a textbook better to understand how such ideologies can be created, and also as a good example of how the past can affect the future in myriad ways.”—Journal of Religious History

• “Frøland’s book provides a fascinating insight into the development of the ideas that led to one of the deadliest political ideologies in human history.”—Reading Religion 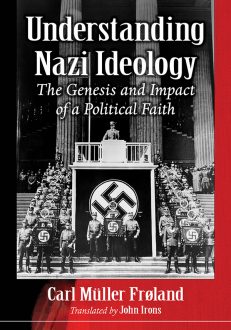