View cart “The War of the Worlds” has been added to your cart.

The War of the Worlds

A Critical Text of the 1898 London First Edition, with an Introduction, Illustrations and Appendices

Wells’ novel, a “scientific romance,” attained perhaps its greatest fame in another form, the infamous realistic 1939 radio broadcast “Invasion from Mars” by the redoubtable Orson Welles. It was also notably made into an early fifties science fiction adventure movie (and there have been other adaptations as well). So indelible is the association that the novel, like the panic inducing broadcast and the Hollywood flick, now is taken as little more than a light fantasy of outerspace terror and human heroism, far from the author’s original vision. The War of the Worlds is a philosophical tale and as such, is profoundly ideological. The world of the Martians represents the progressive future of humanity in a cultural war with our world of tradition and reaction—these are the two worlds in question.
The Mars from which the invaders come is united by a planet-wide system of irrigation canals; for Wells this indicates a socialist world-state. The red planet is red in more than one sense, pointing the direction of terrestrial progress. The Martians in the novel are octopoidal monsters, bodily anticipating the tentacular, all-controlling totalitarian regimes of the twentieth century.

The late Leon Stover, professor emeritus at the Illinois Institute of Technology, was the first to bring science fiction to the college curriculum and was the author of numerous landmarks of intellectual history. He lived in Chicago.

“Wells’s masterpieces get the red-carpet treatment here in these luxurious editions…academic collections supporting English departments should definitely invest in this volume”—Library Journal; “Stover is to be thanked for his years of Wellsian scholarship”—Public Library Quarterly; “Stover, by presenting the intellectual underpinnings of Wells’ work, has provided a powerful tool for understanding his writings, one sees them more deeply, without losing that earlier sense-of-wonder that originally opened the vistas of the young reader’s mind…a crucial guide to these classics of science fiction”—Fosfax; “two cheers for Stoverism…formidable scholarship…serious students of Wells would be foolish to ignore ‘Stoverism’”—The Wellsian; “Stover should be commended for a painstaking and meticulous editorial commentary”—Utopian Studies; “extensively annotated and analyzed by Stover…annotations are filled with insights into Wells’ writings and philosophy”—C&RL News. 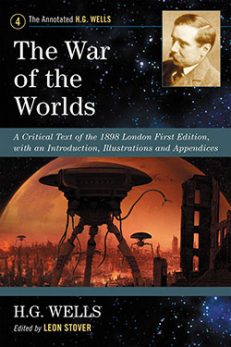