View cart “The Svalbard Archipelago” has been added to your cart.

American Military and Political Geographies of Spitsbergen and Other Norwegian Polar Territories, 1941–1950

Norway’s Spitsbergen Archipelago, known as Svalbard to the Norwegians, is of increasing interest to Arctic scholars and geographers, as well as to military historians and analysts of strategy. It was the farthest northern battleground between German and Allied forces in World War II; it became a political arena for Soviet and U.S. competition during the Cold War; it is now a field of conflict for fishing rights and cultural resource protection; and it serves as a laboratory for the study of global warming. This unique island group occupies a fascinating place in European, Russian, and American affairs.
Here, for the first time, is the complete report compiled by U.S. Intelligence at the beginning of World War II evaluating the islands both geographically and militarily, as well as a report on the archipelago produced by the CIA in 1950. This comprehensive report—never superseded in the years since—has been edited and introduced by P.J. Capelotti. It provides in great detail the American perspective on these islands and their strategic, economic, and geologic value. Maps and illustrations are included, some from the original report, some new. A glossary covers Arctic terms.

P.J. Capelotti is assistant professor of archaeology and American studies at Penn State University’s Abington College in Abington, Pennsylvania. His research centers on the history of Arctic exploration and on the archaeology of human expansion into space.

List of Maps Appearing in the Original Report      xi

The U.S. Military Intelligence Special Study of Svalbard and Other Norwegian Possessions, 1942      9

Appendix I: Summary of Geographic Conditions by Islands      115


*Appendix II in the original report consisted of a collection of weather charts. Because the large size and poor quality of these charts prevents their reproduction here, the original Appendix II has been dropped, and the remaining appendices have been renumbered. 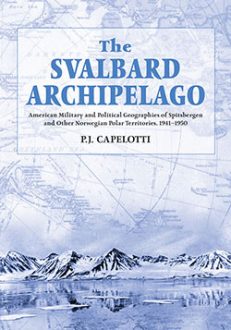 You're viewing: The Svalbard Archipelago $49.95
Add to cart