View cart “The Horror Comic Never Dies” has been added to your cart.

Horror comics were among the first comic books published—ghastly tales that soon developed an avid young readership, along with a bad reputation. Parent groups, psychologists, even the United States government joined in a crusade to wipe out the horror comics industry—and they almost succeeded. Yet the genre survived and flourished, from the 1950s to today.
This history covers the tribulations endured by horror comics creators and the broader impact on the comics industry. The genre’s ultimate success helped launch the careers of many of the biggest names in comics. Their stories and the stories of other key players are included, along with a few surprises.

Michael Walton has been either a comic book collector or a comic shop owner for over thirty years. When not reading or writing about them, he works as an IT professional for a nonprofit organization. He lives in Twinsburg, Ohio. 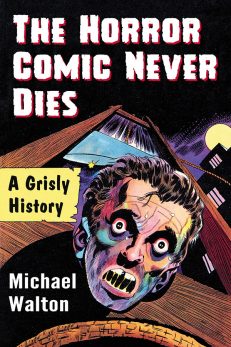 You're viewing: The Horror Comic Never Dies $29.95
Add to cart