A Complete History of the Doo-Wop Legends

Formed by five young black men from Chicago, the Flamingos rose to prominence as one of the top vocal acts of the 1950s rock and roll explosion. They appeared in motion pictures and turned out a string of hit records that have remained popular for more than a half-century.
Providing a wealth of never-before-told stories of the influential quintet and their experiences in a white-dominated industry, this book details the back-room record deals, life on the road, the creative process, meticulous recording sessions and live performances, based on interviews with original members and those who worked with them.

• “The first full-length study of the group, doesn’t disappoint: this is a meticulously researched and very well organized account of their fortunes and changing personnel… Baptista laid [the facts] out in these pages with such admirable clarity… Baptista has marshalled a mass of information with considerable skill.”—Pismotality 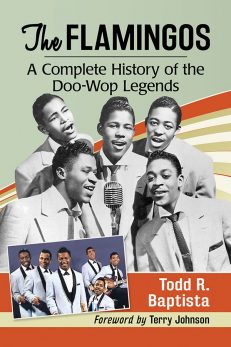