View cart “The Fiction of George Gissing” has been added to your cart.

The Fiction of George Gissing

Most of George Gissing’s 23 novels have a certain air of autobiography, despite Gissing’s frequent arguments that his fictional plots bear little resemblance to his own life and experiences. Starting with Workers in the Dawn (1880), almost all of Gissing’s fictional works are set in his own time period of late–Victorian England, and five of his first six novels focus on the working-class poor that Gissing would have encountered frequently during his early writing career.
While most recent criticism focuses on Gissing’s works as biographical narratives, this work approaches Gissing’s novels as purely imaginative works of art, giving him the benefit of the doubt regardless of how well his books seem to match up with the events of his own life. By analyzing important themes in his novels and recognizing the power of the artist’s imagination, especially through the critical works of Coleridge, Wordsworth, Shelley, and Keats, the author reveals how Gissing’s novels present a lived feel of the world Gissing knew firsthand. The author asserts that, at most, Gissing used his personal experiences as a starting point to transform his own life and thoughts into stories that explain the social, personal, and cultural significance of such experiences.

Lewis D. Moore, a retired professor of English, taught at the University of the District of Columbia in Washington for thirty years. He is also the author of Meditations on America: John D. MacDonald’s Travis McGee Series and Other Fiction (1994).

Part One: The Social Imagination

15. Gissing and Morley Roberts: The Life of Writing in Late-Victorian England      156 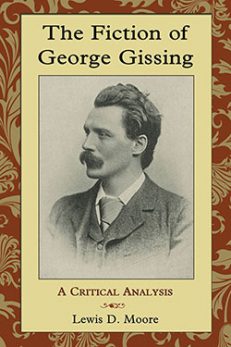 You're viewing: The Fiction of George Gissing $39.95
Add to cart