View cart “The Civil War Abroad” has been added to your cart.

The impact of the Civil War was felt far beyond American shores. Many sites associated with the war remain in Britain and France—the two countries most affected—and traces of it can still be found in such unlikely places as Sweden and Turkey. Both Union and Confederate agents sought support overseas, aided by local sympathizers. Some Victorian Britons, despite their disdain for slavery, saw the South as an incipient nation struggling for recognition, like the Italians or the Poles, but linked to Britain by ties of blood, language and history. The sinking of the CSS Alabama by the USS Kearsarge off Cherbourg brought the war to the European coastline. Ten years after Appomattox, veterans from both North and South found themselves on the same side in the Egyptian army. Drawing on a wide range of sources, this book examines the international side of the Civil War.

Charles Priestley retired after 35 years as an international communication trainer. He is a long-standing member of the American Civil War Round Table (United Kingdom) and lives in Oxfordshire. 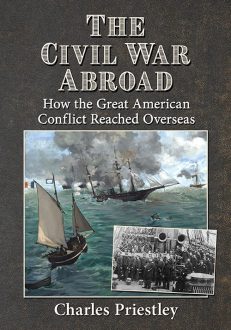