View cart “The Atomic Bomb in Images and Documents” has been added to your cart.

The Atomic Bomb in Images and Documents

The Manhattan Project and the Bombing of Hiroshima and Nagasaki

Samuel S. Kloda spent more than 40 years meeting with the scientists who built the first atomic bombs, and the crews that delivered them to Hiroshima and Nagasaki. Those conversations encouraged him to search archives throughout the U.S. Newly unearthed documents were brought to former members of the Manhattan Project or the 509th Composite Group, who were always willing to autograph and recount the details of these artifacts. Most of the major books on the Manhattan Project were published before 1973. In the years that followed, newly declassified documents became available and showed that many authors had included huge inaccuracies.
Richly illustrated with important documents and photographs, Kloda’s chronicle of the dawn of the atomic age sets the record straight on one of the greatest scientific advancements of all time. Readers will see how a single letter from Albert Einstein to President Franklin Roosevelt in 1939 led to the formation of the Advisory Committee on Uranium and, within six years, to the secret Manhattan Project employing more than 100,000 men and women.

Samuel S. Kloda, M.Sc., has worked as a high school math teacher, bank representative, and an investment advisor. He has written numerous articles on aviation and aerospace technology for the Airpost Journal. He lives in Canada.

• “This book explores the creation and employment of the first Atomic Bombs. These events hold a special place in all of our lifetimes and, indeed the span of human history. The backbone of his very interesting book is the author’s special collection of verifying documents and several hundred related photographs. This book is an excellent summary of all aspects of this very important, and historically controversial, development program.”—Rogers E. Smith, engineer and test pilot, pilot of the last flight of the NASA SR-71

• “Mr. Samuel Kloda has taken the discoveries that lead to the splitting of the atom, along with the events and decisions that lead President Roosevelt in 1942 to direct a Top Secret project, the Manhattan Project, and turned them into a well written story of the efforts to develop a weapon that would help end World War II.”—Charles B. DeBellevue, Colonel USAF (Ret), Leading Ace from the Vietnam War

• “Samuel Kloda’s book is the most historically documented, comprehensive, and engaging story of the Manhattan Project and the Hiroshima/Nagasaki bombings in existence. As a former nuclear weapons training officer and subsequent leader tasked with their possible use, I thought I knew the events. Kloda’s book proved me sadly lacking. His manuscript is an engaging ‘must read’ for anyone interested in the detailed history of this world changing period warfare and diplomacy.”—Admiral R.J. “Zap” Zlatoper, US Navy (Ret), former Commander in Chief U.S. Pacific Fleet

• “Samuel Kloda has written a gripping account of the creation of the Atomic Bomb and preparations for its use, together with pulse-pounding narratives of the missions to bomb Hiroshima and Nagasaki, and disquieting descriptions of the destruction wrought by the weapons. Kloda’s The Atomic Bomb in Images and Documents is a rewarding history of a monumental episode in human experience.”—John Ferling, author of Winning Independence: The Decisive Years of the Revolutionary War, 1778-1781

• “Compiled during several decades of research and networking within the aerospace industry, Sam Kloda’s collection of documents and photographs related to the atomic destruction of Hiroshima and Nagasaki is truly remarkable. Anyone with an interest in the historical archive of these pivotal events in global history will find Kloda’s book deeply fascinating.”—Professor Erik Esselstrom, The University of Vermont. 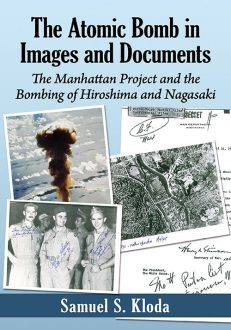 You're viewing: The Atomic Bomb in Images and Documents $49.95
Add to cart