View cart “The Ages of the X-Men” has been added to your cart.

The Ages of the X-Men

Essays on the Children of the Atom in Changing Times

The X-Men comic book franchise is one of the most popular of all time and one of the most intriguing for critical analysis. With storylines that often contain overt social messages within its “mutant metaphor,” X-Men is often credited with having more depth than the average superhero property. In this collection, each essay examines a specific era of the X-Men franchise in relationship to contemporary social concerns. The essays are arranged chronologically, from an analysis of popular science at the time of the first X-Men comic book in 1963 to an interpretation of a storyline in light of rhetoric of President Obama’s first presidential campaign. Topics ranging from Communism to celebrity culture to school violence are addressed by scholars who provide new insights into one of America’s most significant popular culture products.

Origin of the Species: Popular Science, Dr. Hermann Muller and the ­X-Men (Brad J. Ricca) 5
“Evil mutants will stop at nothing to gain control of mankind!” X-Men, Communists and Cold War Containment Culture (John Darowski) 17
Call for Community: Charles Xavier’s School for Gifted Youngsters as Hippie Community Experience (Jean-Philippe Zanco) 30
When Business Improved Art: The 1975 Relaunch of Marvel’s Mutant Heroes (Joseph J. Darowski) 37
From Kitty to Cat: Kitty Pryde and the Phases of Feminism (Margaret Galvan) 46
Days of Future Past: Segregation, Oppression and Technology in X-Men and America (Clancy Smith) 63
“Mutant hellspawn” or “more human than you”? The ­X-Men Respond to Televangelism (Jacob Rennaker) 77
From Terrorist to Tzadik: Reading Comic Books as ­Post-Shoah Literature in Light of Magneto’s Jewish Backstory (Nicholaus Pumphrey) 91
Sexy Art, Speculative Commerce: The ­X-Men #1 Launch Extravaganza (Timothy Elliott and Robert Dennis Watkins) 105
Fatal Attractions: Wolverine, the Hegemonic Male and the Crisis of Masculinity in the 1990s (Gerri Mahn) 116
Generation X: Mutants Made to Order (David Allan Duncan) 128
What Happens “After Xavier”? Millennial Fears and the Age of Apocalypse (Jeff Geers) 145
Race and Violence from the “Clear Line School”: Bodies and the Celebrity Satire of X-Statix (Adam Capitanio) 153
Mutating Metaphors: Addressing the Limits of Biological Narratives of Sexuality (Christian Norman) 165
Grant Morrison’s Mutants and the Post–9/11 Culture of Fear (Eric Garneau and Maura Foley) 178
From Columbine to Xavier’s: Restaging the Media Narrative as Superhero Fiction (Nicolas Labarre) 189
No Mutant Left Behind: Lessons from New ­X-Men: Academy X (Rich Shivener) 203
Autism and the Astonishing ­X-Men (Todd Kimball Mack) 213
Prophet of Hope and Change: The Mutant Minority in the Age of Obama (Morgan B. ­O’Rourke and Daniel J. ­O’Rourke) 223

“goes into extensive detail about the individual characters starting from their origins and their transition and evolution through the decades…makes for fascinating reading”—Collectors’ Corner. 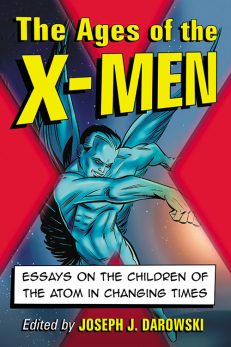