View cart “The Afterlife of America’s War in Vietnam” has been added to your cart.

The Afterlife of America’s War in Vietnam

Changing Visions in Politics and on Screen

The fall of Saigon in 1975 signaled the end of America’s longest war. Yet in many ways the conflict was far from over. Although the actual fighting ended, the struggle to find political justification and historical vindication for the Vietnam War still lingered in American consciousness. A plethora of images from America’s first “televised war” has kept the conflict all too fresh in the memories of those who lived through it, while creating a confusing picture for a younger generation. The political process of attaching meaning to historical events has ultimately failed due to the lack of consensus—then and now—regarding events surrounding the Vietnam War.
Reviewing the record of American politics, film, and television, this volume provides a brief overview of the war’s appearance in American popular culture. It examines the ways in which this conflict has consistently resurfaced in social and political life, especially in the arena of contemporary world events such as the Soviet incursion into Afghanistan, the Gulf War and the 2004 presidential campaign. To this end, the work explores the contexts and uses of the Vietnam War as a recurring subject. The circumstances and symbolism used in the rhetoric of the political elite and the news media, including the New York Times, the Washington Post, Time, and Newsweek, are discussed. Emphasis is also placed on the role of film and television as the book examines movies such as The Deer Hunter and Apocalypse Now and TV series such as M*A*S*H. In weaving together the political and screen appearances of the Vietnam War, the book reexamines the influence of a major episode in American history.

Gordon Arnold is Professor of Liberal Arts at Montserrat College of Art in Beverly, Massachusetts. He lives in the Boston area. 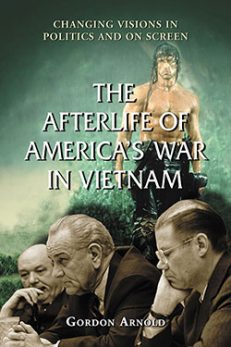 You're viewing: The Afterlife of America’s War in Vietnam $29.95
Add to cart