View cart “Rumrunners” has been added to your cart.

In 1920, the 18th Amendment made the production, transportation and sale of alcohol not merely illegal—it was unconstitutional. Yet no legislation could end the demand for alcohol. Enterprising rumrunners worked to meet that demand with cunning, courage, machineguns and speedboats powered by aircraft engines. They out-maneuvered the U.S. Coast Guard and risked their lives to deliver illicit liquor. Smugglers like Bill McCoy, the Bahama Queen, and the Gulf Stream Pirate, along with many others, ran operations along the U.S. coastline until Prohibition was repealed in 1933. Drawing on legal records, newspaper articles and Coast Guard files, this history describes how rumrunners battled the Dry Navy and corrupted U.S. law enforcement, in order to keep America wet.

J. Anne Funderburg has long focussed her research interests on the Roaring Twenties and the Volstead Era, relying on sources published during Prohibition to capture the flavor of the era. She lives in Appoquinimink Hundred, Delaware. 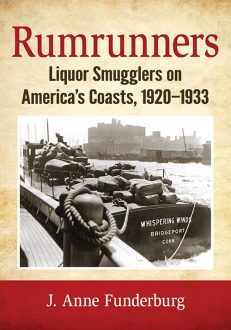