View cart “Queer TV in the 21st Century” has been added to your cart.

Queer TV in the 21st Century

Essays on Broadcasting from Taboo to Acceptance

Television has historically been largely ineffective at representing queerness in its various forms. In the 21st century, however, as same-sex couples have seen increasing mainstream acceptance, and a broader range of queer characters has appeared in the media, it seems natural to assume TV portrayals of queerness have become more enlightened. But have they?
This collection of fresh essays analyzes queerness as depicted on TV from 2000 to the present. Examining Buffy the Vampire Slayer, The Ellen DeGeneres Show, The L Word, Modern Family, The New Normal, Queer as Folk, Queer Eye for the Straight Guy, RuPaul’s Drag Race, Spartacus and Will & Grace, among other series, the contributors demonstrate that queer characters in general have achieved visibility at the expense of minimizing much of their queerness—with a few eye-opening exceptions.

Kylo-Patrick R. Hart is chair of the Department of Film, Television and Digital Media at Texas Christian University. He is the founding co-editor of the academic journal Queer Studies in Media & Popular Culture and the author of several books about media.

Introduction: Media Representation and Sensitive Subjects (Kylo-Patrick R. Hart) 1
Gay It Forward: How Will & Grace Made Gay Male Couples Okay on Television (Zachary Snider) 9
Skeletons in the Closet: The Contradictory Views of the Queer in the Works of Joss Whedon (Don Tresca) 26
Beyond Golden Gardenias: Versions of ­Same-Sex Marriage in Queer as Folk (Gael Sweeney) 41
We’re Here, We’re Queer—and We’re Better Than You: The Representational Superiority of Gay Men to Heterosexuals on Queer Eye for the Straight Guy (Kylo-Patrick R. Hart) 62
From Good to Bad Stories: Examining the Narrative of Pregnancy in The L Word as a Means to Teach and Destabilize Queerness (Anna Ciamparella) 77
The Stylized Image of the White Lesbian: A Model Minority (Renee DeLong) 93
Digital Drag: Queer Potentiality in the Age of Digital Television (Looi van Kessel) 111
Gay Fathers in Modern Family and The New Normal: Class, Consumption, Sexuality and Parenting (Julia Erhart) 128
Brothers in Arms: Spartacus, Historical Television and the Celebration of Queer Masculinity (Thomas J. West III) 142
Leonardo’s Paradoxical Queerness: Da Vinci’s Demons and the Politics of Straightwashing (Dragos Manea) 159
Racial Homophily and Homogeneity as ­Post-Racial Commodification in BrokeStraightBoys.tv (Michael Johnson, Jr.) 178
Sexploitation on YouTube: The Rise, Fall and Rebirth of the Gay Network (Bridget Kies) 194
About the Contributors 211
Index 213 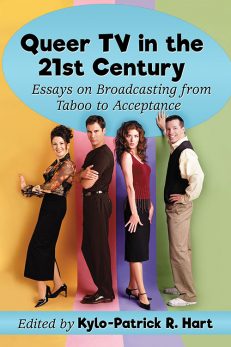