View cart “Mike Torrez” has been added to your cart.

The history of baseball is filled with players whose careers were defined by one bad play. Mike Torrez is remembered as the pitcher who gave up the infamous three-run homer to Bucky “Bleeping” Dent in the 1978 playoffs tie-breaker between the Red Sox and Yankees. Yet Torrez’s life added up to much more than his worst moment on the mound. Coming from a vibrant Mexican American community that settled in Topeka, Kansas, in the early 1900s, he made it to the Majors by his own talent and efforts, with the help of an athletic program for Mexican youth that spread through the Midwest, Texas and Mexico during the 20th century. He was in the middle of many transformative events of the 1970s—such as the rise of free agency—and was an ethnic role model in the years before the “Fernandomania” of 1981. This book covers Torrez’s life and career as the winningest Mexican American pitcher in Major League history.

Jorge Iber is a professor of history at Texas Tech University in Lubbock. His research focuses on the role of Latinos/-as in U.S. sports. He is the author of numerous works on this topic. 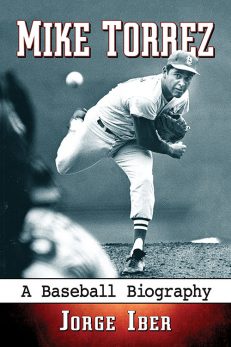