View cart “Lon Chaney, Jr.” has been added to your cart.

Though he was haunted by the shadow of his legendary father and devastated by alcoholism, Lon Chaney, Jr., carved out a very successful film career as Universal’s leading horror star in the 1940s, and later as a leading character actor in Westerns, dramas, and on television. While rightly focused on the career of the underrated actor, this study also explores his life and times.

Don G. Smith is an associate professor in history and philosophy of education at Eastern Illinois University. He has written for numerous publications, including Filmfax, Scarlet Street, Movie Collector’s World and Midnight Marquee. He lives in Riverview Florida.

“welcome…extensive…comprehensive”—Classic Images; “exhaustive…well researched”—Scarlet Street; “excellent…insightful…filmography…is extremely useful and intriguing. Reference books of this quality and affection are rare. This tribute is long overdue and welcome”—Penguin Comics; “a valuable biography of a seldom discussed icon…recommended”—Midnight Marquee; “useful information regarding the actor’s mainstream work and his lesser-known television performances, including an invaluable section devoted to them in the filmography”—Filmfax; “portrays a decent person who was an effective actor, and who was haunted by such despair that the hopelessness of his movie roles seemed the lesser of two evils”—San Francisco Examiner Magazine; “the first entire book on Lon Chaney…a welcome release”—Psychotronic; “a fitting tribute to Chaney’s importance to horror films”—The Other Side of Show Business; “required reading for fans of Golden Age horror”—Film Review; “admirable job”—Little Shop of Horrors; “good”—Videoscope; “refreshing”—Cornerstone Magazine. 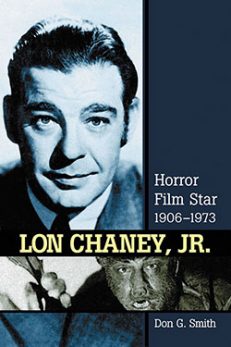