View cart “Jetan” has been added to your cart.

Throughout its hundred-year history, the game Jetan has influenced many writers and game designers. Invented by author Edgar Rice Burroughs for his 1922 novel The Chessmen of Mars, Jetan has been played by enthusiastic fans and serious gamers alike.
This first-ever book on Jetan explores the game’s rules in depth and provides new interpretations based on up-to-date research. It chronicles the game’s history, explores tactics and variants and provides a complete standard for notating games. Also included are three annotated Jetan playthroughs and several practice exercises. Over 80 diagrams and photographs are used as illustrations, and an essay about Edgar Rice Burroughs’ lifelong interest in sports and games further contextualizes the game.

Fredrik Ekman is a middle school teacher living in Sweden. He is an active member of Edgar Rice Burroughs fandom, and often writes on various ERB-related topics.

“Fredrik Ekman has done a masterful job with Jetan, the Martian Chess of Edgar Rice Burroughs. Rules, history, variants, sample matches and problems, it’s all here in a book that will interest gamers, science fiction buffs, and pop culture fans. Even the most ardent Burroughs enthusiast will learn something new in this comprehensive guide to the game at the heart of the sword-and-planet classic The Chessmen of Mars.”—Scott Tracy Griffin, author of Tarzan: The Centennial Celebration and Tarzan on Film. 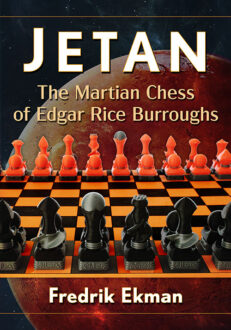